It would seem that the Google Review Team have become philosophical in the handling of the reviews. “If a Review was removed for Spam, but then it gets re posted, is that Review Spam or Not?”

My personal feelings on this is NO Google, there is no place for philosophical thought when it comes to dealing with Spam Reviews. Perhaps I have become jaded in my whole opinion, as spam reviews seem to dominate the Google My Business forum and typically dominates all my escalations as a Google Top Contributor.

I’ll let you be the judge of this.

Mid September a florist in Bli Bli (love this name) reported a negative review added to their Google business listing. Nothing strange in this, except the reviewer “Jane Smith” had reviewed the other 3 florists in town and a neighboring area’s florist.

This is pretty much a clear indication of the account being used to negatively impact competing businesses in the area, or “Jane Smith” is a flower hater. 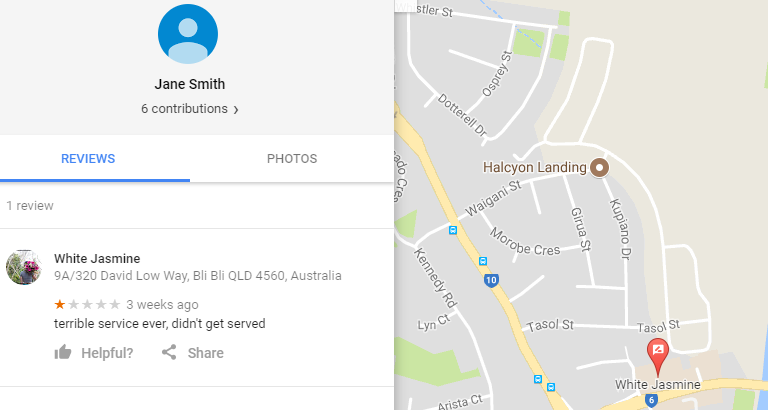 **Note**
This is the current reviewers account, I never thought I would need to screenshot the original account showing the four negative reviews.

In response to the escalation the Google Review team removed ALL four of the negative reviews.

Four weeks later White Jasmin florists contacted me again in the forum, the negative review was back. “Jane Smith” had posted a negative review again. This time they have only reviewed one florist and not the other three. (Screenshot Above)

Again I escalated this to the review team, making sure to include the original escalation where they had deemed “Jane Smiths” reviews spammy enough to be removed.

Today I received the dreaded boiler plate response, ” the review doesn’t violate our content policy so the team won’t remove it.”

Yes, you read that correctly!

Rather then go through Google’s review teams thinking behind this decision again, you can read: Why Most Fake Google Business Reviews will Never be Removed

To help Save My Sanity, please take a moment to let me know what you think.