Appearing in Google+ Posts is Read More Lines instead of the Read More …..Link.  Apart from my rather silly line count post ( Someone had to) and yes it appears to start at Line 14, scratch that, I have seen different results. (I know you wanted to Know!) 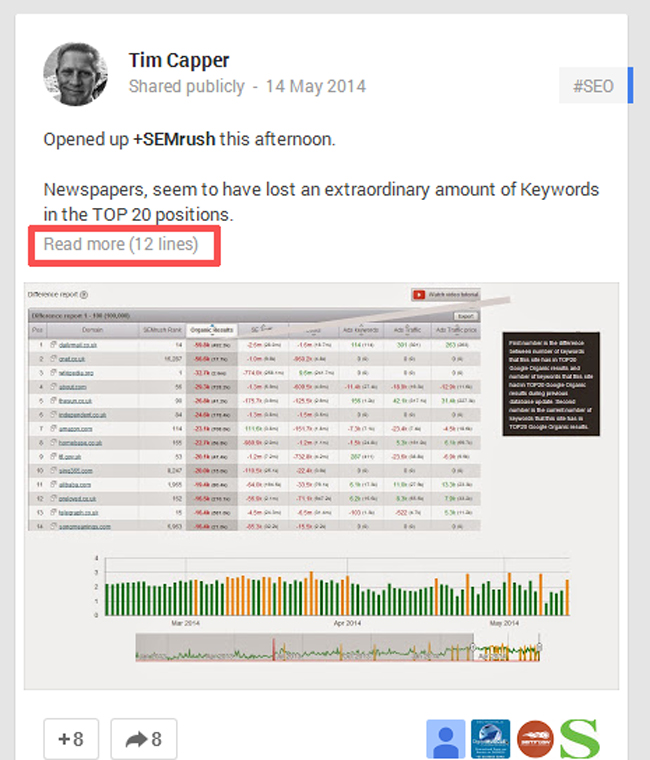 David Amerland gives us his opinion on why,  the Read More Lines

1. It’s courtesy and a better user experience. It’s amazing it hasn’t been done before. You’re in a hurry to get something done. You’ve seen a post whose intro has caught your eye. There is a “read more…” now it could be a couple more lines or it could be an essay of 2,000 words. Now you can make up your mind what to do about it.

2. Author Rank signal? If lines are being counted then they are being tallied somewhere. Long posts, short ones and the ones in between are now probably being aggregated as part of the profile and its activity.

3. It helps foster engagement. This picks up from point 1. A post that has some length, that might have been given up on because time does not allow, can now be bookmarked for later. This increases the value of the post in terms of readership and also increases the likelihood that there will be deeper engagement if someone returns to it specifically rather than quickly skim reading it and adding a +1.

4. It can aid semantic analysis of profile activity. This ties in with point 2. A profile soon develops patterns of posting and these are a signal in itself that over a length of time actually means something.