Over the past few months Brands have been complaining that they have seen a drop in Facebook traffic. This seems to have coincided with the launch of “promoted posts”, where you can pay to increase a posts visibility.

In recent months, some Facebook page owners have noticed that their accounts are driving much less traffic to their websites than they used to. In some cases, Facebook clickthroughs are down by as much as half, despite a huge growth in likes. Even worse, some brands noticed that this drop in traffic coincided with a new Facebook feature called “promoted posts” through which brands can pay cold hard cash to push their content out to more news feeds than they would normally reach—and the brands are not happy about it.

This juxtaposition of events makes it look like Facebook is artificially driving down traffic, then holding the old level of traffic hostage in order to generate some new revenue. But Facebook insists it’s doing nothing of the sort; instead, the company says that it’s just trying to keep its users’ Facebook feeds from getting too crufty with promotional posts they don’t want to see. In other words, Facebook claims to be on the side of users against the advertisers, even if it’s making money on the deal.

Facebook is a great social tool for business. By nature of how Facebook works, it is easy to engage your target audience and reach new demographics and markets. Social media has been around long enough now that it is not just enough for a business to simply have a Facebook page. Conversely, a business may have jumped on the Facebook bandwagon and everything was just fine. There was a steady influx of visitors and “likes.” What happens when Facebook traffic drops? Is it just a momentary fluke, or are there things you can do to get lost Facebook traffic back?

Many page administrators post the same status updates to keep things simple. This really doesn’t do much to engage fans or move traffic to your Facebook page. The easiest way to generate Facebook comments for a business is to have an engaging status update. If a status achieves a higher ranking, it will be displayed to more people. This equals more comments and increased traffic. How do you get the most out of your status update?

A more interesting status update will rise to the top your fans’ news feeds. The more opportunities you give your fans to interact with you, the better.

If you just use your status update for advertisements, this may one of the reasons for a drop in traffic. Relevant content is the best way to engage fans. A restaurant, for example, could post recipe ideas or mention seasonal dishes or even post the soup of the day or other menu highlights to peak the interest of potential customers. Try asking a question in your status update. Using the restaurant example, you could ask “What’s your favorite holiday soup?” or other questions that are likely to get a response. The more creative you are, the better.

Beautifully designed tabs and other bells and whistles are fine, but where’s the call to action? You want to make sure your content is sharable. That’s really the key to effectively using social media as a marketing tool. All content should include a share button to encourage fans – note the use of the word fans, meaning you want to focus on people who already “like” you on Facebook – to post your content to their walls. It is good to have people visit your page and view your content. When a fan posts your content and shares it with their 200 or so friends and those friends share it with their friends, you’ve struck marketing gold. The result is a boost in traffic and possibly more revenue. Content that isn’t sharable, isn’t as effective as it could be.

Custom Facebook tabs can be used to further encourage a customer relationship. Contests are always a great incentive to encourage action by your fans. Tabs can also be a good place to put your newsletter. In this case, you can also target any visitor to your site. This is the point where you can use lines such as “Like us to get fun family recipes” or “Like us for your chance to win our fan sweepstakes.” Contests are a great way to engage fans and encourage non-fans to become fans. Once a non-fan clicks “like” they are automatically entered in your contest. This also allows you to keep track of users and collect data such as email addresses and phone numbers.

There’s nothing wrong with creating special content that only fans can view such as contests and promos. You don’t want to leave non-fans in the dark though. Another reason for a drop in your Facebook traffic may be that you are favoring fan content over non-fan content. You want to balance your content between what is available for anybody who visits your page and for those who become fans.

While you want to offer enough content to engage non-fans, you want your overall content to be fan-centered. You want to use your status and tabs to create engaging content that makes a casual browser a fan. All you are asking for is a single click for a visitor to become a fan. According to some accounts, there are more than 800 million active Facebook users around the world. This includes more than 100 million users in the United States and more than 30 million in the United Kingdom. Users have a lot of choices when it comes to content. They aren’t going to just randomly “like” everything or become fans just because they visit your site. There needs to be enough fan-centered content to peak an user’s interest and encourage them to become a fan.

If you find your Facebook traffic dropping, you don’t want to wait and hope that it’s just a fluke – even though that may be the case. It’s best to be proactive. Start with your status updates since this where most people first discover your page. Make sure the content of your status update is relevant to the general content of your Facebook page. Save the overt sales pitch for your actual page. Users tend to gravitate towards unique content. Contests are especially attractive. Finally, change your status on a regular basis and keep content fresh. If you make an effort, you should be able to boost your Facebook traffic.

Failing This head over to Google+ Brand Pages 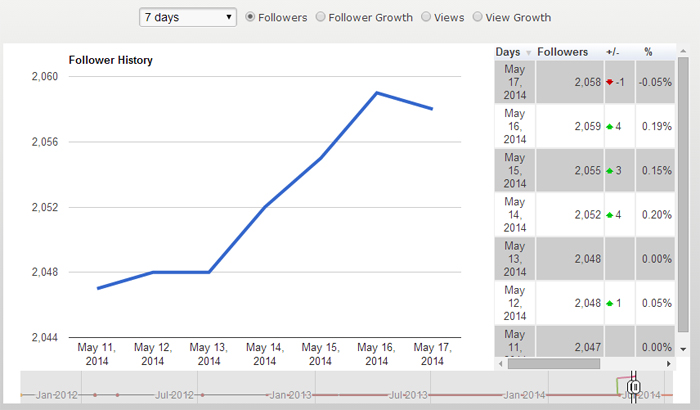 Once again Google is forcing unverified and incorrect menu information direct into restaurants Google My Business listings. There is a long history going back years with Singleplatform being used by Google My Business, originally added as a menu link, ordering and now injecting their Menu direct into a restaurants Menu Tab. In every complaint I […]